We got a very deep night sleep, exhausted from traveling.

A newlywed couple from Australia and we depart with Jona our guide and Tyrone our tracker who sit In Front of the jeep, watches the animal footprints and the direction they’re wandering to.

The topography here is different. It’s a bush safari, lots of dry brush, bushes and trees coming out of their winter season.

We see lots of male and female Nyala Antelopes. The male is beautiful with large twisted horn, a dark coat with lighter downward striped and russet colored legs, as though he’s sporting boots! The female has a lighter coat and also has white downward stripes.

There are massive male Kudu antelope They’re very tall with twisted horn and the female is much smaller. Their coloring is more of a uniform light brown.

In the middle of the bushes, we were privy to see a pack of wild dogs. Their patched print is beautiful with the cutest round ears.

They are ferocious, they hunt in packs and they care for their litter in packs. A painted dog is what they resemble, everyone one of them has a different print. Sadly they’re on their way to extinction due to disease and human habitat encroachment.

We learned how male Nyalas, exhibit a slow machismo dance against another male, their mane rises straight up, their tail curls up, their step is lithe.

Dwarf mongoose must be meals for several animals

The most beautiful black bird with the longest tail, the Fortktail Drongo, is something else to watch in flight.

The Rothschild Giraffe are much more skittish than the Masai giraffe. I was lucky to get a close up!

She turns herself around on the branch effortlessly.

Opening her eyes, looking straight at us with her yellow diamond colored eyes

Resting after catching her prey;

The bushbuck , which she carried all the way up the tree!

They set up a bush breakfast for all of us in the wild.

They cooked sausages, eggs, bacon, bring in some cheese, scone cookies and Amarula coffee; it gave us a nice jolt.

Some of us decided to walk back with our guard and his rifle ( just in case) to our lodge; about 2 miles.

We come back to our room and enjoy our tiny pool overlooking the river.

Within a split second, while Johanne and I are enjoying our terrace, a huge baboon walks on the balcony open the door and goes directly to the living room, jumps on the credenza and steals the sugar; Johanne screams at him and he darts out! so quick and hilarious but no time for a picture.

We are definitely in their zoo. We have tons of monkeys jumping all over and walking on our balcony, Male Nyala antelopes roaming in front and eating all the leaves, Bushbucks and Impalas everywhere!

The lodge always serves a late lunch before the late afternoon drive. I slept though it; a blessing! 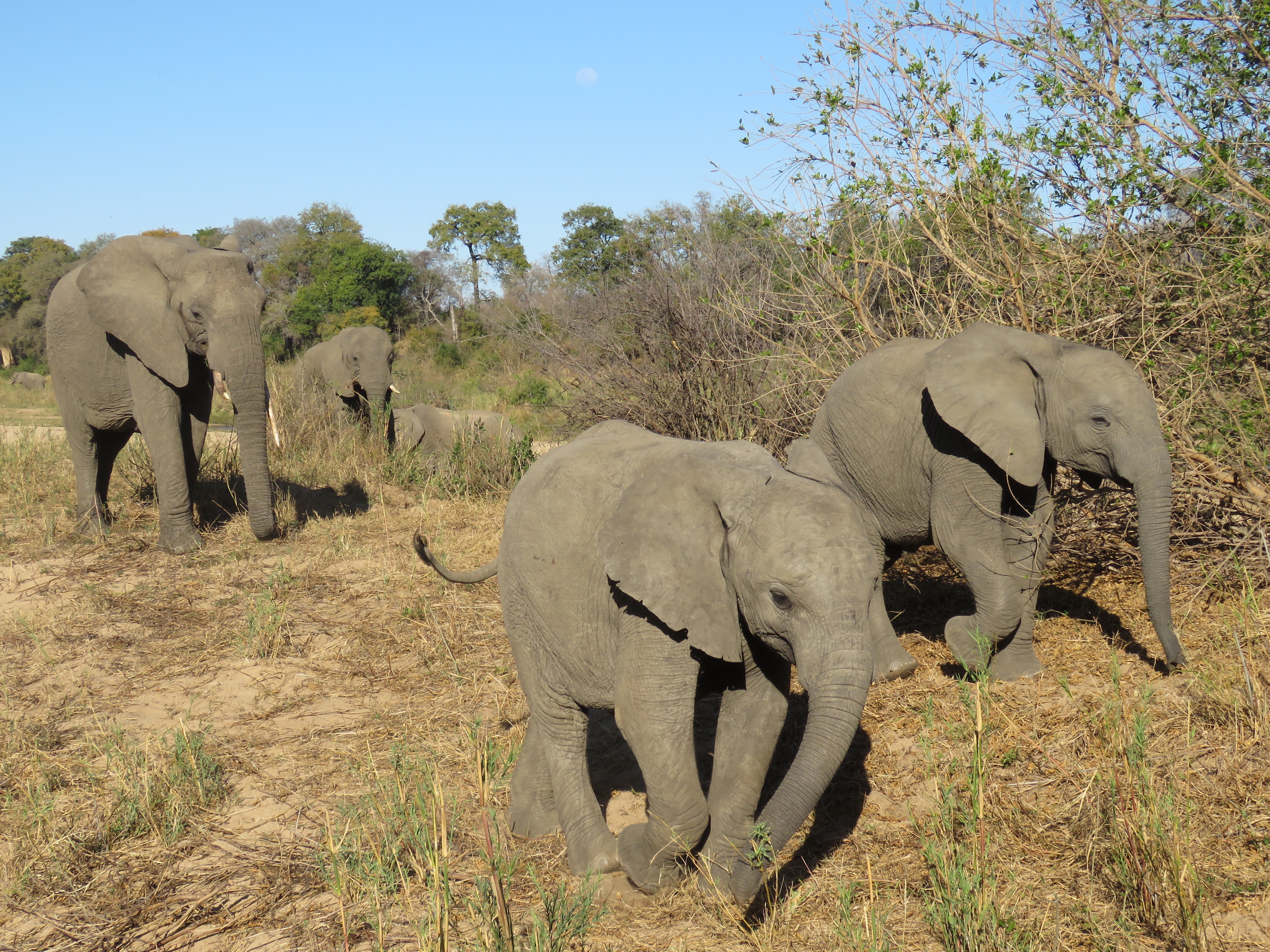 During the afternoon drive we just sit near the herd” memory” of elephants on the stream in front of us.

it was a delight to see the interaction between mother and baby.

We watched the most beautiful sunset as we drive to our next surprise!

The best is always the cat! We drive far to find this leopard in the dark, he is breathtaking to watch.

He has a superb nocturnal vision, a keen sense of smell and a remarkable agility to climb any tree. He is shy and solitary.

We drive back slowly and watch the clear sky filled with stars.

Jona, who truly is a fountain of information, point to the Scorpius constellation and explain that you can recognize it with its bright star Antares. It must be magnificent to watch this sky during a dark moon, being that is an absence of light pollution in these parts.