We start the safari at 7.30am and it will last for

The Mornings are cold, we need our warm jacket as the truck is wide open.

Nelson, our guide is a Masai, he was born around here. All Masai have one tooth missing at the bottom, which signifies the rite of passage.

Going towards the entrance of the park, lots of Maasai herders bedecked in ruby- red are guiding their herds of either cows or sheep, Ruby-red to keep the dangerous predators away!

Facing our camp, there is a mountain range called Oloololo which means “zig zag” ; since the Mara river is parallel to it, it follows the same pattern. We encounter a family of baboons, grooming themselves, or staring at us! Near the road a family of Topi grazes,

it looks as though, black paint was slashed strategically in their bodies.

Beautiful Impalas cross the road to graze on the other side.

Me, Johanne, Barbara, Paulinda and a couple of Ethiopians.

The road criss crosses the Savannah dotted with Acacia umbrella trees dispersed everywhere, making it a unique landscape. The wind sways the tall grass where many predators hide;

Such as the magnificent Cheetah, he was sleeping.

Then he sat up and watched us. He has stunning markings- like his black markings resembling black eyeliner drawn down to its mouth.

Its torso is protruding as we watch him get up. He is the fastest animal with the largest lung capacity, as his legs joins way up in the air racing at 120 km per hour. It is sad to see him with a tracking collar as they are getting harder to see and more vulnerable to near extinction.

Tons of zebras hang out amongst the Wildebeests. Zebras personality are much like a horse but shorter in stature.

We have chosen to be in this area for the migration of the Wildebeests, which only last three months. They starts in the Serengeti in Northern Kenya and travel to Tanzania, then back to the Serengeti.

There are thousand of them and they migrate in a perfect line. It is a show to hear their hoofs cadence as well as the sound they make!

The female lion is a stunning cat with its yellow eyes. She is sitting below a tree with its many babies.

The baby lions have curled up ears, just adorable!

We see a few warthogs, with their short legs and a wanna be rhino look with their horns. Definitely not the prettiest Animal of the jungle.

Nelson sees a tons of trucks in the distance.

We raced there and lo and behold- When he’s done eating, she gets up and watches him walk away slowly,

She races in front of him 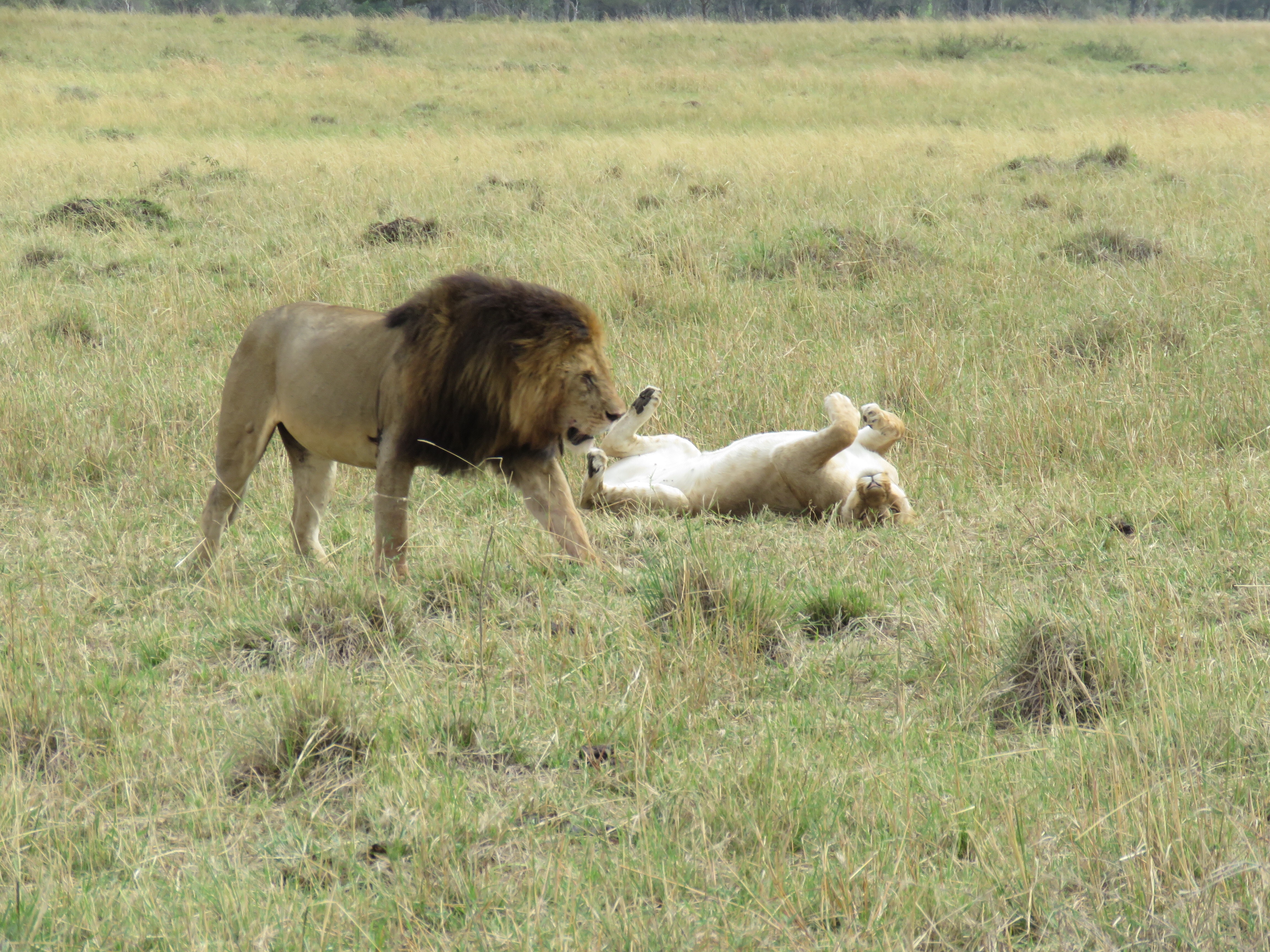 She rolls herself in front of him, and is ready to romp! But he says ” no Thank You, I’m too full”!

So then she goes back eats the prey; it was a wildebeests. 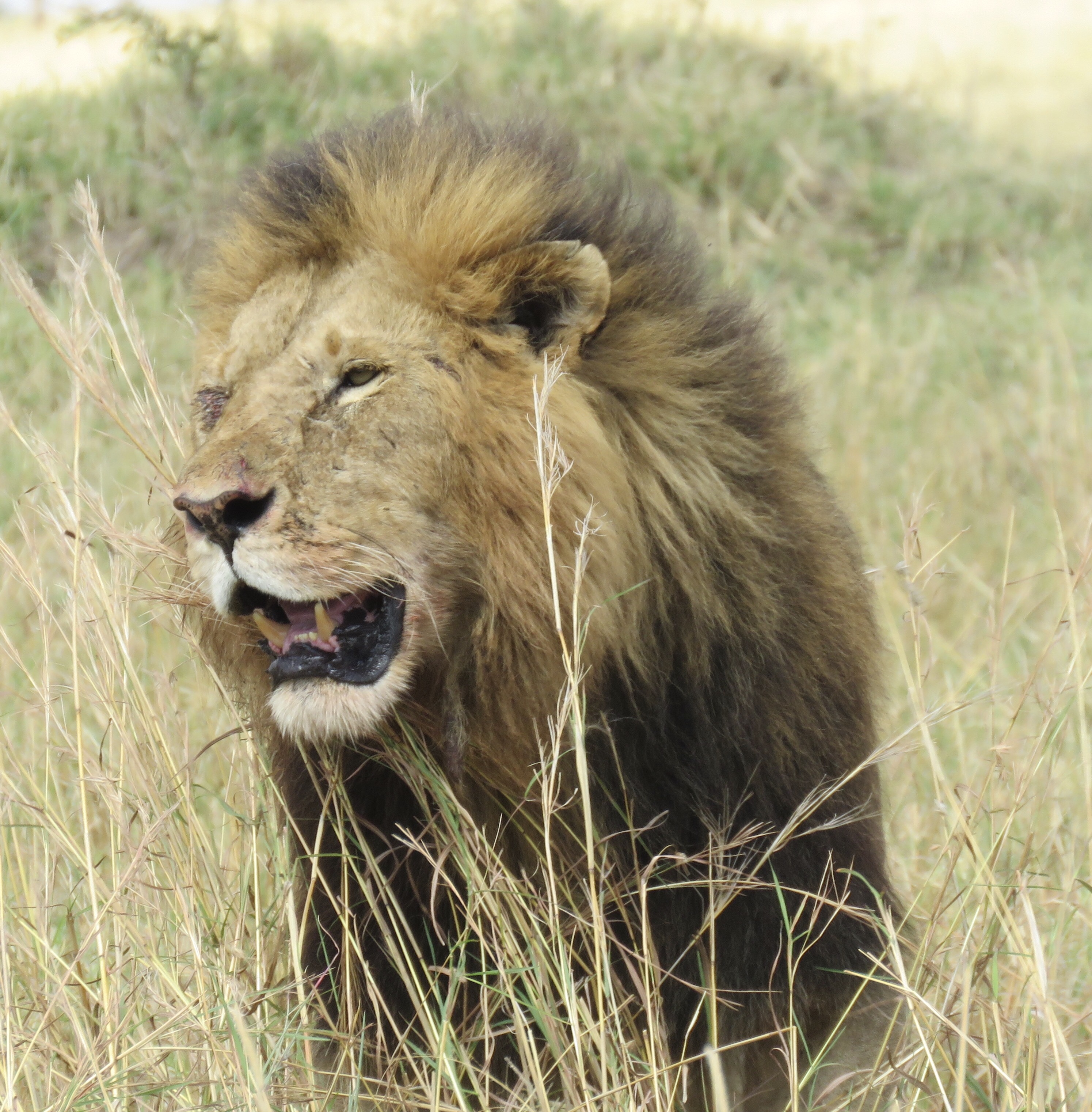 This lion had the thickest brown mane with a major pair of fangs!

Then she goes and lays in the grass next to another make lion! This one looks like he was in some fight!

As gory as it was to see, you experience the famous Pyramid and its hierarchy of animal survival in its full glory!

They were birds and vultures everywhere waiting for a morsel

The lions are all relaxing with full bellies afterwards

A huge eagle was perched on the top of these trees waiting for a treat.

We see some old bulls with nicely shaped horns .

We finally get to the Mara river where We hand our for a good 45 minutes, watching alligators in the river patiently waiting for the crossing of wildebeests.

We spot some colorful tiny birds in the tree in front of us.

All of a sudden. Lone zebra crosses the Mara river, we figure the wildebeests will follow, the zebra turn back and the alligator attempts to bite him but he races back to land untouched.

It was so scary, glad he made it ok. We encounter some gazelles who look at us.

We go back to another area thinking we might see a river crossing, but no.

On the way back the baboons always hang out near the road. Since we were out until 2pm we decide to stay in; the lunch is quite late.

I get a massage and lay on the pitch watching the hyppos bathe.

Dinner tonight is lively tonight with more people in the dining room.

It clears out early!